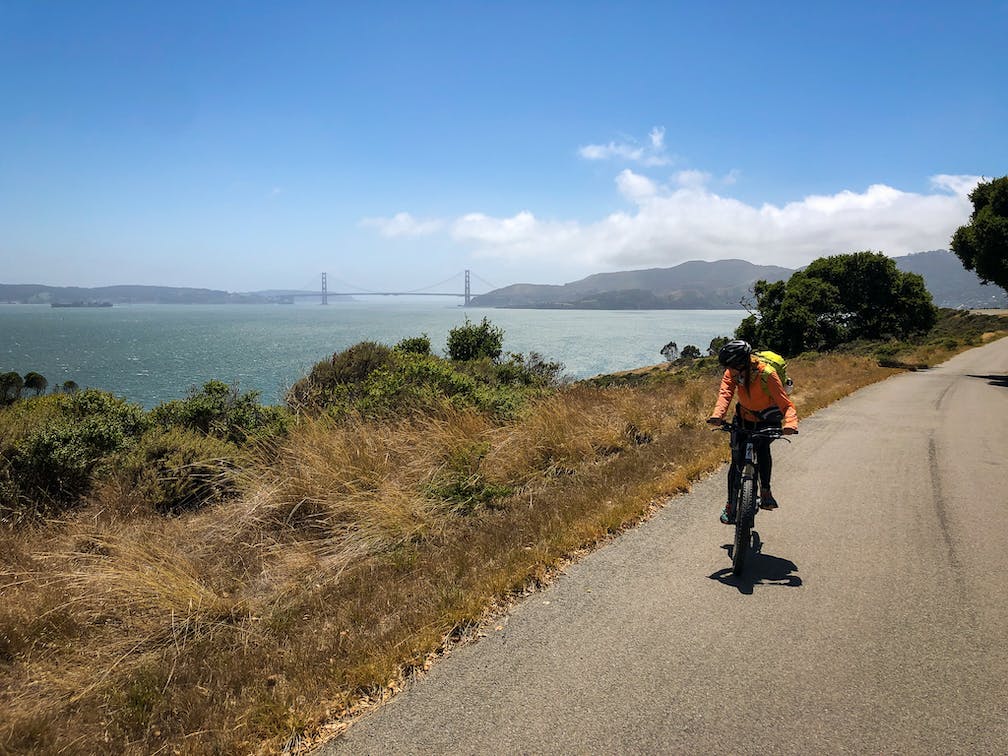 A bicycle is a fantastic way to take in the 360-degree panoramas you get on Angel Island. The straightforward Perimeter Road is a car-free route (except for the occasional state park truck) that circumnavigates the island. You’ll pass historic military buildings and sweet-scented and non-native eucalyptus forests.

Big panels of information about Angel Island's dark past are found along the way. From 1910 to 1940 the island was a detention center for immigrants, 97 percent of them Chinese. They would be detained for two weeks to six months. It wasn't until the early 1960s that this scenic little island in the bay became a state park.

The entire ride is lovely, with just a few inclines (and some zippy declines where you’re asked to walk your bike). The premier viewpoints are on the southern end of the road by Battery Ledyard, where you score a double-bridge view of the Golden Gate and Bay Bridges.

TIP: Bring a bike lock and park it at the bike rack at the first southern viewpoint of San Francisco near Battery Wallace. Then walk down to Angel Island's hidden Perles Beach for a beach picnic with a view.

BONUS: After your visit to Angel Island, and upon returning to Tiburon, see if you can get a patio spot at the classic Sam’s Anchor Cafe. Famous for its lively atmosphere, the outdoor setting is glorious, overlooking Angel Island, Alcatraz, and the San Francisco skyline. We think it should be equally famous for its pineapple margaritas and cup of clam chowder.

LISTEN TO THE PODCAST: In the episode "Outdoors, You Complete Me" Weekend Sherpa co-founders discuss their explorations of Angel Island and cycling around the island.

The Angel Island Tiburon Ferry is currently running on an online reservation system. Tickets are $15 for adults and $13 for children. It's an extra $1 to bring a bicycle.