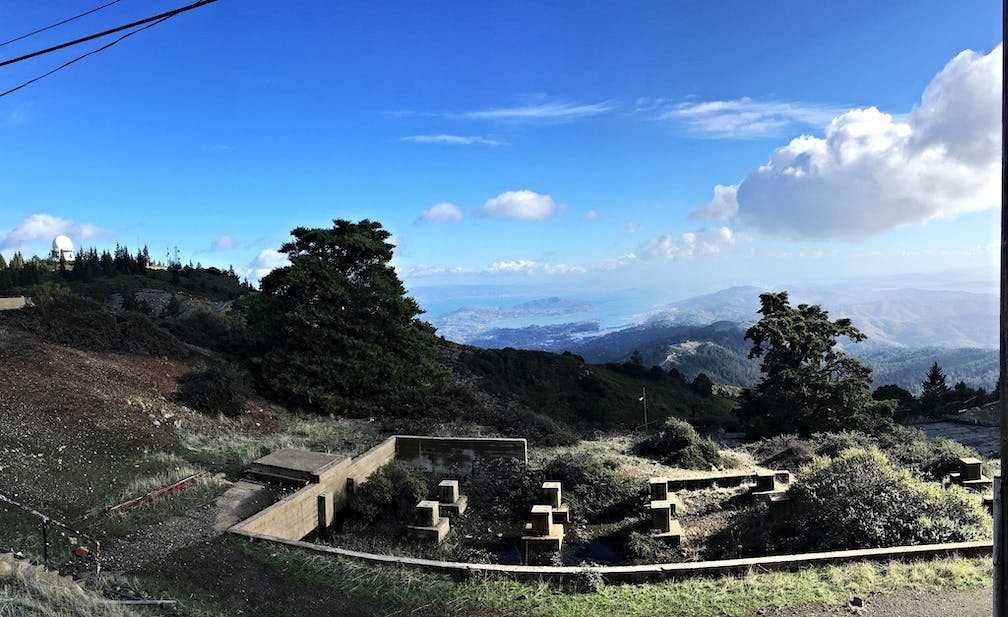 Marin's Mount Tam is one of the Bay Area's most traveled mountains, yet even this icon of the North Bay holds some secrets … including a summit! The less-traversed West Peak is actually Tam's original summit, and still receives less than 1 percent of the 3 million annual visitors to Mount Tam. Get to it on a 2.5-mile loop hike that starts via the 0.6-mile Mountain Top Trail. As you make your way up, the rocky fire road funnels into a densely forested singletrack trail before opening up to surprising views at the trail's end on Table Hill. In addition to the stunning mountaintop views of Alpine Lake, the Pacific, and San Francisco Bay, Table Hill is marked by a sprawl of remnant cement structures, staircases, tile floors, and gutted buildings from the military's 1941–1976 use of the peak. There's even a cinderblock building that once served as a bowling alley. After a quarter of a mile through the remains, get a look at the radar dome resembling a giant white golf ball. It sits on what was originally the 2,600-foot peak of the mountain before it was leveled to build a radar station. This area is off-limits, but visible from the road. Drop down Arturo Trail, a 0.5-mile singletrack that switchbacks through a foggy microclimate past trees covered with layers of green moss before meeting with Lagunitas–Rock Spring Fire Road. Head left up the fire road for the final 1.25 miles, passing Portrero Meadows before the rolling trail dips back down to the start of the loop.