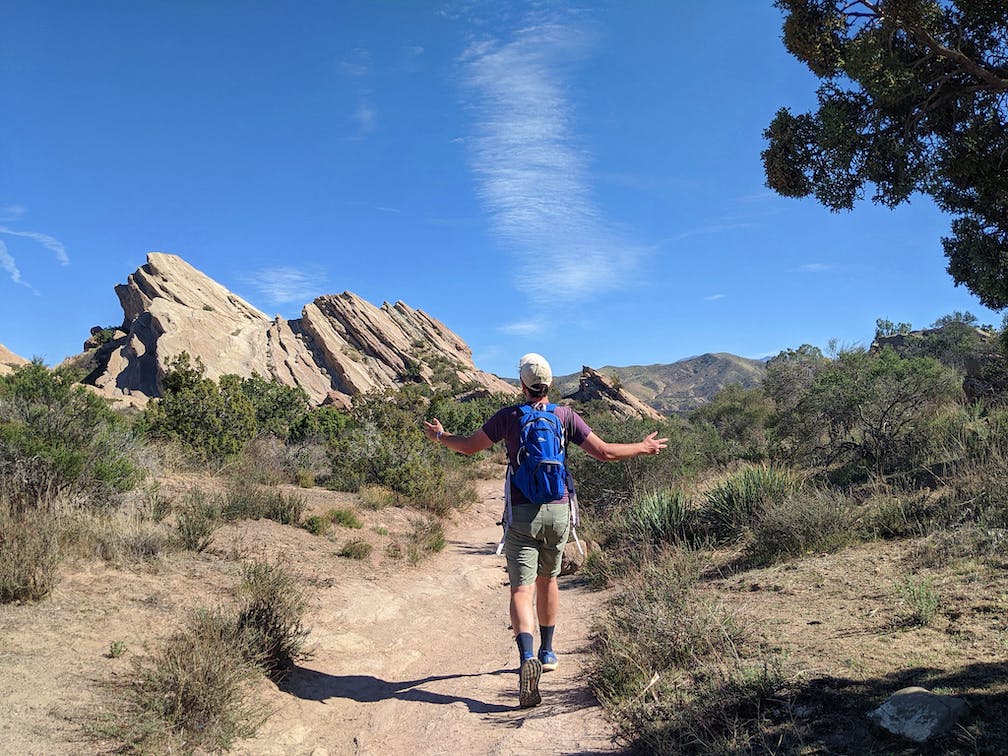 There’s a reason some geological formations become a hotspot for filmmakers, history buffs, and adventure seekers alike: They’re just so cool. And the sandstone giants of Vasquez Rocks might be the coolest damn formations in Southern California. Explore the craggy slabs on a 2.5-mile (round-trip) hike that also connects to a segment of the Pacific Crest Trail. Park at the Vasquez Rocks Natural Area Park Interpretive Center and grab a map.

Then follow signs for the Nature Heritage Trail. As you continue south, passing a campground, interpretive signs tell of local flora, such as a glorious California juniper, sagebrush, and yucca, as well as a Tataviam dwelling, grinding bowl and pictograph. Keep straight at the next junction (with Horse Trail), but be sure to climb the hill to your right for some great first views of the massive rocks, named after the notorious bandit Turbicio Vasquez, who hid from the law here. You can climb the 45-degree-angle behemoths that have been featured as alien terrain (Star Trek) and western backdrops (Blazing Saddles, Westworld).

These rocks were formed through roughly 25 million years of erosion. Keep heading southeast and follow signs to hike a section of the PCT, where you’ll stay left to keep the rock formation views going. This trail soon becomes the Geology Trail, passing through more boulders and depositing you at a dirt road leading back to the start. Rock on.

To get to the Vasquez Rocks Natural Area Park Interpretive Center and parking lot, take the I-5 to the CA-14 for 14 miles, exiting Agua Dulce Canyon Rd. and turning left. Stay on Agua Dulce Canyon Rd. for 2 miles, which becomes Escondido Canyon Rd. After another 0.5 mile, the entrance will be on your right. Dog-friendly!

Story and photos by Matt Pawlik