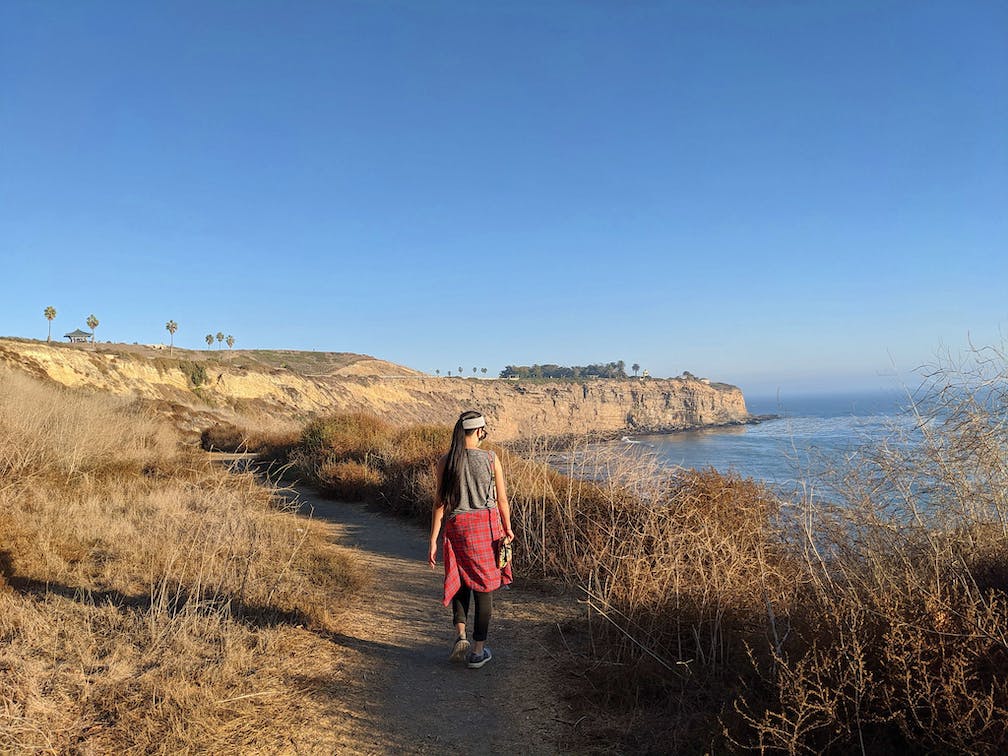 It’s got big trees, big ocean views, and one big SoCal surprise. It’s also got figs, the world’s fastest animal flying overhead, and a fresh fish market famous for its giant shrimp. Oh, and beer. Basically, there’s more than a few fascinating features packed into this 2.5-mile Park to Park to Park walk in San Pedro.

Start at Point Fermin (park at the southeast end), where you can snag views of the Sunken City ruins, the site of a famous landslide in the 1920s. Bordering the park are nearly 20 giant Moreton Bay figs, all of which are perfect for a shady picnic spot. Walk along the cliff-adjacent path for constant coastal vistas on your way to the local landmark, the Point Fermin Lighthouse. Built in 1874 from California redwood lumber, this building on the National Register of Historic Places once guided ships into the harbor.

Continue north along the coast, leaving Point Fermin Park and soon reaching Angels Gate Park, marked by a protruding hill on your right and home to the Fort MacArthur Museum. Make the steep climb to reach the Korean Friendship Bell, a bronze beauty modeled after the largest of its kind in Korea (Emille Bell or The Divine Bell of King Seongdeok the Great of Silla).

Presented by the South Korean government for the US Bicentennial, it is an LA Historical-Cultural Monument and represents the friendship between the two countries. It’s also an incredibly photogenic spot, both for the bell itself and the 360-degree views you get from here. Look for the Korean zodiac symbols on the twelve columns and resident kites enjoying the breeze. Scan for dive-bombing peregrine falcons—yes, you can spot the world’s fastest animal (reaching speeds up to 242 mph) right here in LA. Admire the colorful detail work on the pavilion’s green and blue tiled roof. The pavilion’s red columns grow even brighter when lit by the setting sun. (You’ll find peace too, looking out from the pavilion over the Pacific Ocean as the day comes to an end.)

Head back down the hill and continue north along the coast to reach your third and final public green space, Wilders Addition Park. Walk the dirt trail along the seacliffs and under palms, producing the most intimate beach views on this walk. Return the way you came.

BONUS BEACH, BEER and BIG EATS: Stop by Cabrillo Beach, just a 1-mile walk from Point Fermin Park, for some fun in the sun (or maybe a nap on the sand). For beer, head to San Pedro Brewing Co. or Brouwerij West. For your feast, head straight for the San Pedro Fish Market, a port of call establishment famous for its giant shrimp tray, a smorgasbord of garlic bread, fajita peppers, potatoes, different spices, and ... a ton of local shrimp!