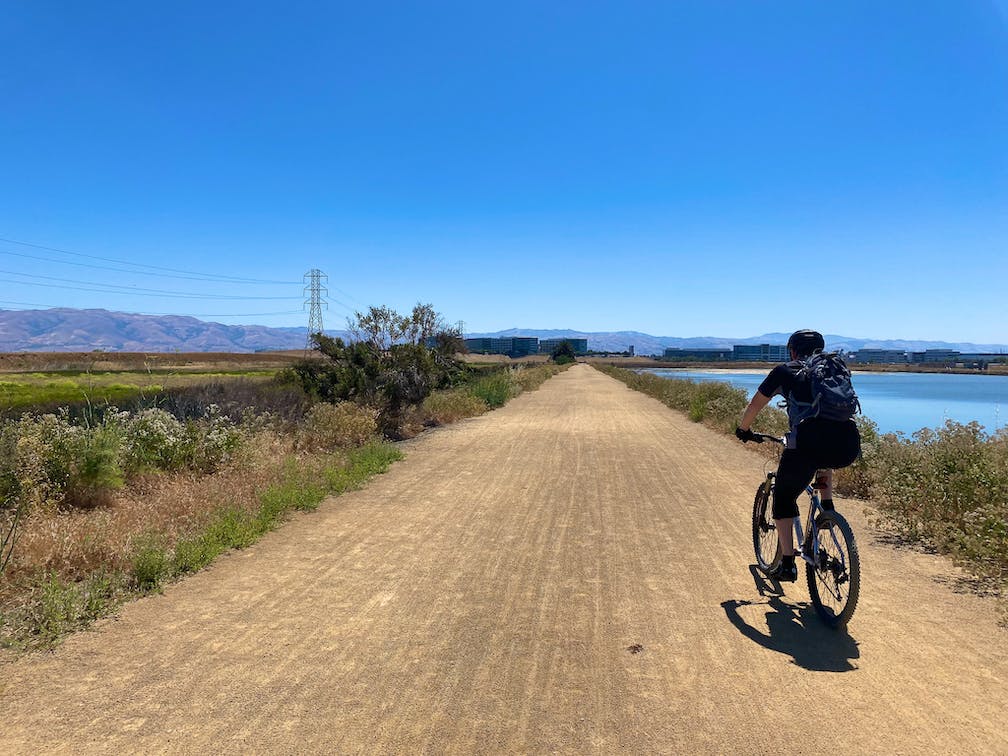 You don’t need much tech to explore Silicon Valley and Santa Clara … you just need two wheels! Bike the San Tomas Aquino Creek Trail for the sheer multitude of Silicon Valley attractions—from an amusement park to protected wetlands and the 49ers’ stadium. This 10-mile out-and-back ride takes cyclists through some of the best spots in the South Bay.

The journey begins at Everett N. “Eddie” Souza Park, home to a community garden, playground, and education center. From here, hop on the San Tomas Aquino Creek bike trail and head north. This paved trail follows the San Tomas Aquino Creek all the way to the southern tip of San Francisco Bay, and cyclists can catch glimpses of heron, egrets, and ducks as they enjoy the marshy wetlands.

After 2.5 miles, the surrounding tech campuses give way to roller coasters and water slides. To the left of the trail lies California’s Great America, an amusement park with rides to satisfy the daredevil in everyone. Less than half a mile farther up trail, Levi’s Stadium appears on the right. Stop and snap a photo next to the giant 49ers helmet.

Continue north along the trail, keeping an eye on the surrounding wetlands. This close to the bay, turtles and fish can sometimes be spotted in the shallow water. At the intersection with the Bay Trail, veer right to head west toward Sunnyvale Baylands Park. This popular spot features picnic and grill areas, an RC airplane field, a sports center, and just north of the park, beautiful views of San Francisco Bay. Soak up the sights, including the golden Diablo Range in the distance, and then retrace your route back to Eddie Souza Park.

Everett N. “Eddie” Souza Park is located at 2380 Monroe Street, Santa Clara. From US-101, exit onto San Tomas Expressway, then turn right onto Monroe Street. Turn left into the park. San Tomas Aquino Trail is open during daylight hours. Dog-friendly (on a leash).