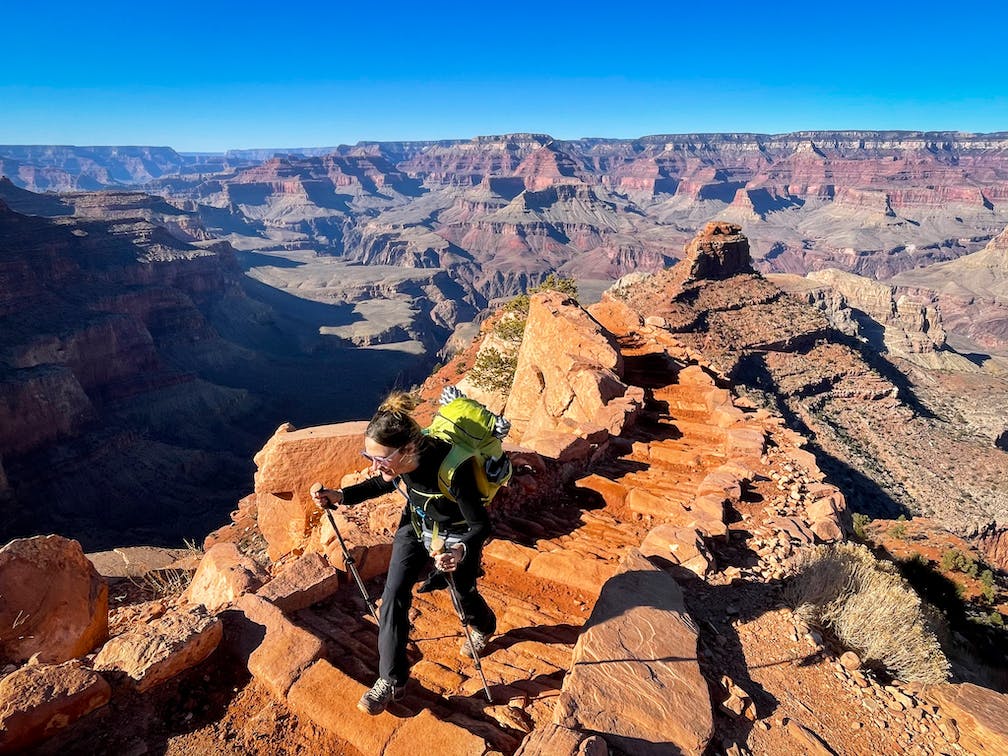 The sheer size and magnitude of the Grand Canyon feels so full scale that most people decide to simply appreciate its magnificence from the rim. But for those who want to get in a spring hike to see layer upon layer of the park’s grandeur—including the river—the 3-mile (one-way) journey to Skeleton Point via the South Kaibab Trail is the one to do.

The trail is challenging, with 2,040 feet of elevation change, but it’s a totally manageable adventure for experienced hikers, and brings spellbinding panoramas with multiple vantages for taking in the spectacular scenery. It’s also the first point on the trail where you can see the river! From the Grand Canyon Visitor Center on the South Rim, you’ll take a shuttle to the trailhead and then start your descent. Spring can see icy sections at the top, though it usually melts pretty quickly.

The trail is deceptively steep, which means you can easily underestimate how far you’ve actually hiked down into the canyon before realizing you have to climb back up again, at high altitude. Be sure to bring plenty of water (there are no water sources on the trail) and snacks. Going down the South Kaibab Trail is glorious for its sweeping, consistent panoramas across the canyon’s golden, red, and marbled rock taking on various shades as sunlight casts about at different angles through the day. Cloudy days bring extra drama to photos and may make for easier hiking as you follow a ridgeline down into the canyon; there’s no shade (for this reason alone, this hike is best in non-summer months).

Your first major vista happens in just under a mile: Ooh-Aah-Point, which, well, speaks for itself. Ooh and aah you will! Up next is Cedar Point at 1.5 miles in, where you’ll find restrooms and plenty of places to have a break or decide whether to continue to Skeleton Point. In spring with cooler weather, Skeleton Point is a reasonable turnaround point, and worth the extra 1.5 miles from Cedar Point (in summer, Cedar Point is recommended as the turnaround point, due to heat dangers).

The switchbacks are steeper, the scenery as stunning as ever. Skeleton Point is marked on the trail; you’ll head to your left at the sign and scope out a vantage to take a break or some selfies. Enjoy the view of the blue Colorado River winding way below as resident ravens and even some condors coast the thermals above. Speaking of above, it’s time to start back to the rim. Three miles up, especially in the warmer afternoon, can take longer than going down. Grand time!

SUNSET BONUS: While summer months bring hordes of visitors to the rim of the Grand Canyon for sunset ogling, in spring fewer folks wait around until the golden hour. One of the best places to catch a sunset is just north of the famous Grand Canyon Museum. The paved multi-use trail from the parking lot parallels the canyon, with several offshoots to plateaus overlooking the depths of the scenery. Just don’t try any silly stuff at the ledges. There’s plenty of places for hanging out during the magic hour, at one of the world’s most spectacular places. (Pro Tip: Marriage proposals recommended.)