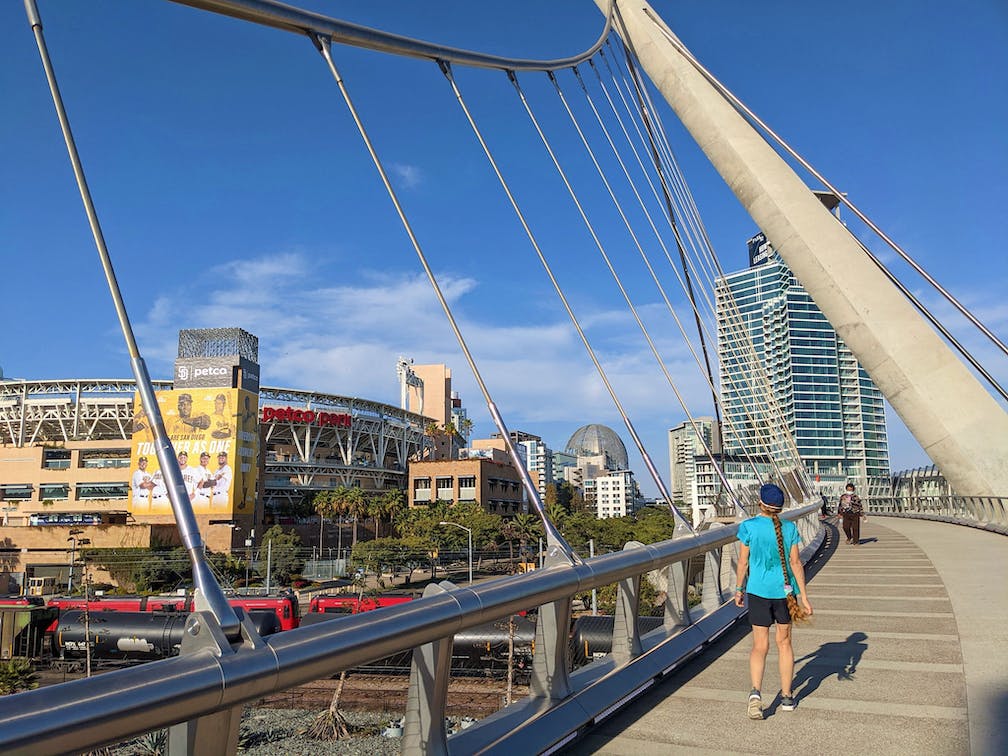 Visit the ballpark and a National Historic Landmark on this 3.75-mile urban jaunt in San Diego. Along the way, enjoy some authentic Mexican fare as well as some craft beer. Although this city walk can begin at any of the parks, we recommend starting at Cesar Chavez Park (3-hour free parking), a waterfront palm-tree-laden gem with perhaps the best views of the 2.1-mile Coronado Bridge. Enjoy the sight of passing ships at the harbor from socially distant picnic tables at the end of the pier.

Head north on Cesar E. Chavez Parkway to Barrio Logan (one of fourteen designated California Cultural Districts), passing under the welcoming sign and entering the art-centric neighborhood. You’ll pass by murals constantly on this walk, but your first samples come as you reach the shops at Mercado del Barrio. There’s lots to enjoy here, but we like Attitude Brewing Company which offers a rotating tap list (we like the double hazy IPA “Legendary” that is a tribute to Kobe Bryant).

Take a right here and after two blocks you reach Chicano Park, a National Historic Landmark with incredible murals under the freeways that also has a skate park. The art here is not only beautiful, but also expansive—this is the largest collection of Chicano murals in the world. You could spend hours here marveling at the artwork. Enjoy the art before heading northwest on Logan Ave (1 block north of National).

You’ll soon pass Las Cuatro Milpas, a legendary spot dishing up authentic Mexican fare—not to be missed. Continue on Logan, passing more murals and turn left onto Beardsley Street for 2 blocks, returning to National and turn right. Continue on National for 3 blocks, passing local staples Thorn Brewing Co. and Cafe Virtuoso before reaching the railroad and transit station. Turn left here at Imperial, which leads you directly to Petco Park, the home of the Friars since 2004 and one of the coolest parks in all of baseball (full disclosure: this writer is a hometown fan, so he may be a bit biased!).

Circle the park in a clockwise direction—the best photo op comes on the cool Harbor Drive Pedestrian Bridge at the south end, to get complete views of the beautiful modern stadium. At the northern end, there is a limited entrance to the Park at the Park, a greenspace for fans to watch the game from the outfield, and also a mini dog park! Before leaving the grounds, pay respect to one of the most exciting and up-and-coming teams in all of baseball!

Before heading back, check out Half Door Brewing Co., just north of the park on Ninth Street. It’s got outdoor seating to enjoy the ale and snacks, has a view of the stadium, and is also stationed in a really charming wooden clapboard house. Spend some time exploring the Gaslamp district of downtown San Diego, and return to your car on the same streets back and enjoy some final views at the bayfront. Slam Diego!

To get to Cesar Chavez Park (and lot), take the I-5 S to the Cesar E Chavez Pkwy. exit and head south on Beardsley St. After a quarter mile, at the T-intersection turn left onto Harbor Dr. followed by an immediate right onto Cesar E Chavez Pkwy., which leads you to the park and lot. Dog-friendly!